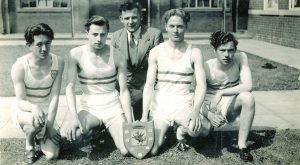 Welcome to Ruabon Grammar School Old Boys’ Association. This site is not associated with Ysgol Rhiwabon (click here), the larger school spawned from the old Boys’ and Girls’ Grammar Schools in the nineteen sixties.

But it is for those boys who attended Ruabon Boys’ Grammar School up to its closure and absorption into the school which would become Ysgol Rhiwabon. This means anyone up to and including those who joined in September 1966. Some of our more venerable members can trace their school years as far back as the second world war. It is their pleasure to attend an annual dinner of reunion amid a more general ambition to invite later generations to make their appearance.

If the site has an ambition it is to collect and curate memories of the old boys’ school and to add to the general historical record. Teachers and pupils retain a genuine fondness for a school system which now feels lost. The photographs and other recollections here are almost all works in progress – anyone knowing anything about the years illustrated are welcome to make their contributions. No reward is sought or payment made. Get in touch via the contact page.

The site is for the nostalgia of something we all had but recognised not well enough. As Mr Charles asked in a first year maths lesson in the old school house: “When will be the best years of your life?” We muttered about futures yet to come but he shook his head gravely and said: “It’s now boys. These are the best days of your life.” 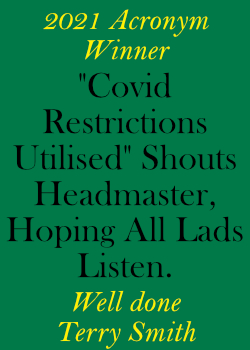